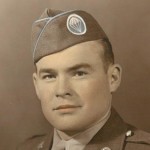 Francis Exum (Will) Williamson went home to be with our Lord on Thursday, July 17, 2014, at the age of 93. He was a barber and at the age of 88, after cutting hair for over 60 years, he retired. He served in the U.S. Army in World War II as a Paratrooper that jumped on D-Day and was a POW for 7 months. He was also a Mason.

Survivors include: daughters, Carolyn Hayes of Plano, Janet Vickers and husband, Larry of Como and Debra Williamson of Richardson; son, Benny Williamson and wife, Cathy of Lewisville; brothers, Billy Williamson of Clarksville and Glynn Williamson of Ashdown, AR; grandson, Charles Hayes and wife, Cindy and one great-granddaughter, Cate Hayes. He was preceded in death by his parents, two brothers and two sisters.

Memorials can be made to the Wounded Warrior Project or First Baptist Church of Richardson, 1001 North Central Expressway, Richardson, TX 75080.