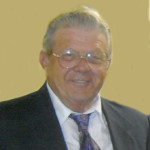 Private Services will be held for David Neal Risley, age 74, of Yantis, who died on Saturday, July 19, 2014, at Mother Frances Hospital in Winnsboro. He was born on April 3, 1940 to Herbert Lawrence and Ruth McNary Risley in Dennison, Ohio. He married Sandra Rose on February 22, 1996 in Fayetteville, AR. She survives. David served in the U.S. Army during the Vietnam War and was a retired Service Manager with George’s Gas. Other survivors include: sons, Caleb Risley of Yantis, Tim Risley of Winnsboro, Benjamin Risley of Fayetteville, AR, Tracy Risley of West Fork AR, Robert Wess of Oklahoma City, OK and Timothy (T.J.) Capwell of Lincoln, AR; daughters, Elaine Yeager of Ohio and Tylinda Milstead of Fayetteville, AR and numerous grandchildren and great-grandchildren. He was preceded in death by his parents, several brothers and sisters.

The online registry can be signed at: www.murrayorwosky.com