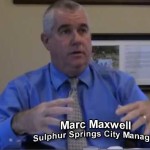 Sulphur Springs City Manager Marc Maxwell estimates city work crews have fixed 800 potholes in the city. He says that’s about half of a list of potholes called in by the public. Crews have also been making repairs behind utility cuts on streets. During August, the street crew will take time out to rebuild Rogers Street. It’s being done with grant funds that must be used before October. Once September rolls around, Maxwell says the street crew will get back to their pothole list and repairs of utility cuts. By the way, you can still report a pothole if it’s one you haven’t reported before.