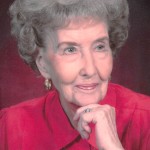 Modene Huggins, of Sulphur Springs, passed peacefully into the presence of God on Saturday, June 14, 2014. She was born September 10, 1921 to Cecil Nabors and Estelle Potts Nabors in Sherley, TX. She married Robert M. Huggins in Hugo, OK on September 11, 1936. Those left to cherish her memories are her sister, Jo Carter, of Lubbock; nephew Mickey (Jan) Carter of Amarillo and niece Peggy (Bob) Pearce of Lubbock. Their children include Cecil (Melissa) Carter, Robert (Erin) Carter of Amarillo and Ashley (Grant) Looney of Midland. Grandnieces include Emily and Claire Carter and Brooklyn Looney. Modene and Bob were members of First Methodist Church of Dallas and were involved in Eastern Star in Dallas where they resided for many years. They later moved to Sulphur Springs, where they owned International Harvester. Modene and Bob were faithful members of First United Methodist Church, Sulphur Springs. She enjoyed the fellowship of a group of women who volunteered weekly to fold the Spire. Modene was preceded in death by her parents and her husband.

Funeral services will be held at 10:00 a.m., Tuesday, June 17, 2014 at West Oaks Funeral Home Chapel with Rev. Pete Adrian officiating. Interment will follow at Sherley Cemetery with Cecil Carter, Tom Sellers, Arvis Tanton, David Black, Erick Sienty, and Caleb Wiler serving as pallbearers. Visitation will be from 6:00 to 8:00 p.m., Monday, June 16, 2014 at West Oaks Funeral Home. The family extends heartfelt appreciation to her Carriage House Manor family and to Lequida Jennings, a special friend who Modene referred to as her “adopted daughter”.