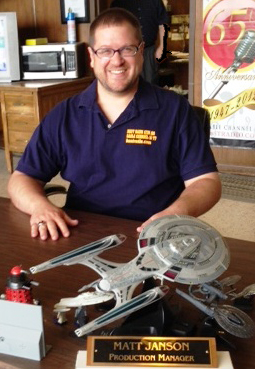 Hello, my name is Matthew John Janson, and this is a brief bio about me. I was born and lived in Aurora Colorado until I was about 12 or 13, then I moved to Shreveport Louisiana and lived there until the summer of 1992. I then moved to Miller Grove, Texas, the summer before my Jr. Year of high school, where I currently reside.

I graduated from Miller Grove, I.S.D. in 1994 as Valedictorian of my class, and then began my academic career at A&M Commerce the fall of “94. At the time, it was East Texas State University. In May of 2000, I graduated from A&M Commerce earning a BS in Radio\Television, with a second major in English, and a minor in Art.

I joined the KSST staff in August of 2003 as a board operator with a few other responsibilities. Shortly after that I was moved into the position of Production Assistant. A couple of years later I was also given the responsibility of PSA Director. After years of experience and acquiring a better understanding of the equipment, I was promoted to my current position of Production Manager.