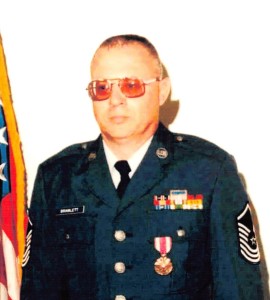 Military graveside services for Jerry Wayne Bramlett, age 74, of Plano, formerly of Brashear will be conducted at 2:00 p.m., Tuesday, June 17, 2014 with the Hopkins County Military Coalition. Dr. Jimmy Henry will be officiating. Visitation will be from 6:00 to 8:00 p.m., Monday, June 16, 2014 at West Oaks Funeral Home. Mr. Bramlett passed away Thursday, June 12, 2014 at Life Care Center in Plano, TX. Mr. Bramlett was born on September 1, 1939 in Brashear, TX, the son of Earnest Doyle and Susie (Easley) Bramlett. He married Joan Christian on June 5, 1965 in Sulphur Springs, TX. She survives. Mr. Bramlett was retired Military and served during Vietnam. He served in the United States Marines for four years and the United States Air Force for 24 years. He was of the Methodist Faith. In addition to his wife he is survived by his son, Ronald Wayne Bramlett and wife Marie of Brashear, daughter, Cathy Peterson and husband Ryan of Firestone, CO, grandchildren, Michael Emmons, Colby Peterson, Cara Peterson and Caitlin Peterson. He was preceded in death by his parents and one brother, Raymond Earnest Bramlett. Memorials may be made to the Hopkins County Veterans Memorial, P. O. Box 533, Sulphur Springs, TX, 75482.

Arrangements are under the direction of West Oaks Funeral Home. www.westoaksfuneralhome.com.