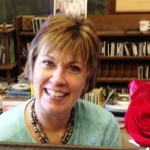 “Music and the impact of songs is an essential element for my life, and for many of the people I know. My privilege is to have worked in music for 25 years now”.

Born in Odessa, Enola Gay was raised in Longview, and “got here as soon as she could” to Hopkins County. A familiar voice on KSST’s Morning Show since 1989, she loves her radio audience as much as she loves music of all kinds. Western Swing, also known as “country jazz” is her all-time favorite genre, and she was honored in 2012 as a Western Swing Hero with induction into the Cowtown Society’s Hall of Fame. Listen for Enola’s Country and Western Music Hour with Benny Potter on KSST soon.

The Reilly Springs Jamboree is another pet music interest, partly because KSST was involved in the birth of that show in the autumn of 1956, and carried live performances on the air into the 1960’s. Enola began producing Jamborees in 1995 on a monthly basis and continues finding local talent for the show on the third-Saturday night of each month, from country to bluegrass to gospel. She has also brought Western music to town as an ambassador for the National Day of the American Cowboy.

As a vocalist, Enola Gay has appeared with jazz guitarist Kurt Bittner at private engagements, wineries and dining venues all over N E Texas. She has sung with the Pat Minter Band, Bob, Ray and Enola Gay, Gale Hague and Lone Star Express, Holly Bond and the Bluegrass Texans, the Groove Felons, the N E Texas Choral Society and as one of the “Jay Birds” at Main Street Theatre. On You Tube, she is featured in numerous music videos by Charles McGuyer, and in Crossroads Music Theatre and KETR’s Songwriter’s Showcase performances.

Due to her involvement with local causes, Enola has been recognized as Hopkins County Woman of the Year 2012, Community Pride and Community Builder awards, and as first runner-up for Ms. Hopkins County 2014.

Enola’s five children and 9 grandchildren are the enduring elements of her happiness. At family gatherings, her daughters sing harmony and her son plays guitar. Several of the younger ones are realizing how “cool” playing music is, and that makes Enola smile!