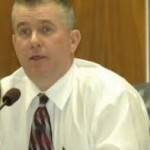 Water – Dredging continues at Cooper Lake; however, the quality of the water is still good enough to make Cooper Lake the preferential water supply. Dredging at Cooper Lake is approximately 20% complete. At this rate, dredging will not be completed until 2015.

Cooper Lake is 7 feet low, an improvement over last month’s reading of 11 feet low. Judging from the graph at right, the North Texas Municipal Water District (NTMWD) has resumed pumping.

STREETS – Davis Street is underway. The Davis/Connally intersection is completed. The remaining portion of Davis Street reconstruction from Connally to Atkins will be completed this month. The first concrete pour will be on Thursday.

Mulberry and Rogers are under construction thanks to a grant from the USDA. Both streets will be reconstructed in concrete. Mulberry Street is completed. Construction on Rogers will resume upon completion of Davis. The Capital Construction Division and the Water/Sewer Distribution Division installed water lines and sewer lines on both streets.

CLAIMS – We had two workers’ compensation claims in May, one for a minor puncture wound stemming from a Taser incident, and the other from poison ivy.

We had three liability claims in May. One motorist struck a curb and thought it was the curb’s fault. TML denied that claim. Another motorist claimed damages from a pothole. That claim was also denied. A police officer backed into a towel dispenser at a car wash. TML paid the liability claim and damages to the vehicle.

WASTEWATER TREATMENT PLANT – The wastewater treatment plant continues to struggle. The plant treated effluent to a daily average total suspended solids (TSS) reading of 10.53 mg/L in April. This number is within our permit parameter of 12.00 mg/L; however, we exceeded two other permit parameters for the month of May. The continuing industrial discharge from local industry combined is more than the plant can handle.

The filter project is completed. We are waiting for the vendor to perform final setup before putting the filter online. I expect to bring the filter online in the next two weeks. This project was performed in-house with labor from the Capital Construction Division and the Wastewater Treatment Division.

Now that our tertiary filter project is completed, the TSS number should improve substantially; however, other parameters like ammonia, biochemical oxygen demand and dissolved oxygen will not improve much. Other improvements are still needed at the treatment plant.

REVENUES AND EXPENDITURES – Finance Director, Peter Karstens is not here to present the year-to-date summary of revenues and expenditures. We’ll catch up next month.