Jo Ann Hilderbrand Taylor comes from a line of farmers, and feels that fresh homegrown produce is more valuable in our lives today than ever. Better health is part of it, but so is the fact that nature’s bounty keeps us grounded to the earth’s gifts and the farmers and farming families who produce these. Jo Ann and her husband Richard own J and R Farms, located near Lake Fork, and they own and operate a produce stand located in Sulphur Springs at 316 South Davis Street. There’s a bounty of delicious garden produce and a wealth of history behind this fresh, familiar stop!

“Jo” as she is known to her customers, transitioned her family’s produce stand from the Main Street spillway two years ago due to the addition of the Crosstown Trail. She decided to move onto a lot her mother owned on South Davis Street, and she set up shop there. Produce is part of her life, because she was raised by farmers, most of them women. She explained “my maternal grandmother Connie Nichols grew a large crop of strawberries in the sandy land at Reilly Springs when she was in her prime, and my granddad raised watermelons on their 200 acres. And large plots of peas. That’s a huge undertaking for just two people, but they did it for years, along with their vegetable garden that they ate out of. There was no grass in my grandma’s garden! She was out there every day with a hoe. And they not only raised the produce, they found markets to sell it at. That’s how my grandmother was smart. Their daughter is my mother, and a lot of people remember her as Rose Mary who had a produce stand at the lake spillway on Main Street in Sulphur Springs. Sometimes known as ‘the lady at the lake’, she and my step-father Frenchie Beaudin were well known by everyone who came to buy produce under the shade trees. And we are carrying on the family tradition here!” 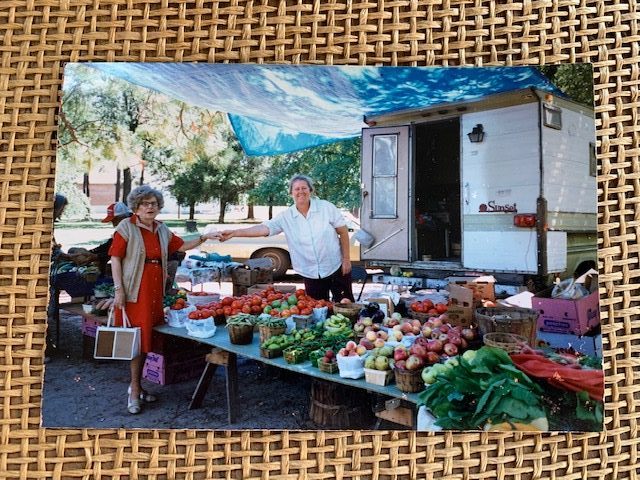 “Right now, people are wanting peas. We offer a variety of peas including purple hull , cream and pinto beans, and we’ve got them already shelled. They’re $9 quart or $4.50 pint, they are bagged, refrigerated and ready to go. We’ve got Celebrity, Big Boy and Early Girl tomatoes, and we have a LOT of them chilling here at the stand. We raise between 2,000 and 3,000 tomato plants in our greenhouse per year! We’ve got yellow squash, zucchini including the golden variety, and we’ve got white patty pan squash, too. We handle several varieties of watermelons in now, grown by farmers in Grapeland. These are Red Diamond variety in the $6-$10 range. We also try to carry yellow meat melons too, also seedless as well as the big seeded melons. Our fragrant West Texas cantaloupes are from Midland growers, and they are the sweetest and best you can eat. A farmer in Hunt County grows our okra for us, and we buy all he raises for this stand. Peaches? They’re freestones from Pittsburg, and there will be different varieties of these ripening all summer. I’ve got plums and blackberries in the chilled case now. Yes, we grow a lot of our produce, but the rest we get from farmers whose quality we trust. 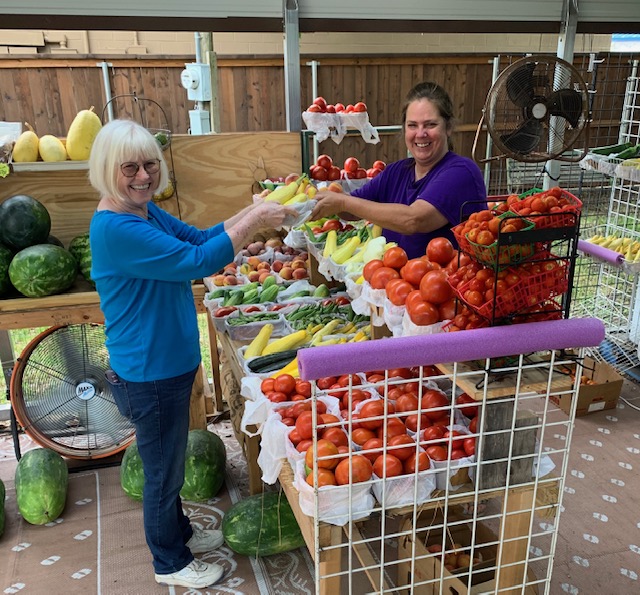 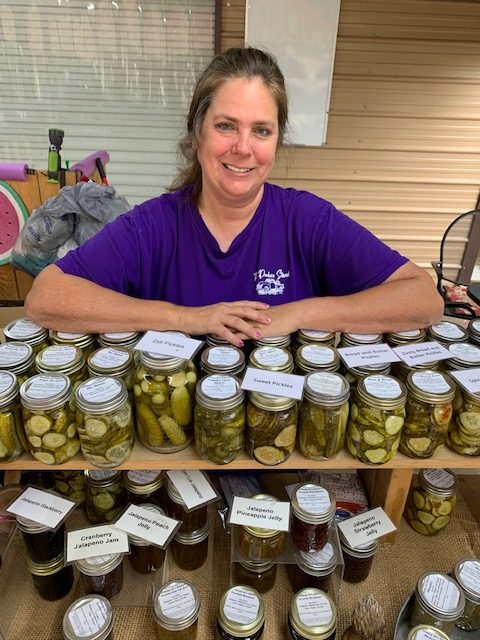 Canned goods from ‘Granny Annie’s’ inside the produce stand

Jo remembered back on her childhood and youth, growing up at the market places around Northeast Texas. “People will probably remember that there was a produce stand in Buford Park in Sulphur Springs, and later we were on Gilmer Street. and other places. Mother would grow and sell greens in the spring. She’d have her Ranchero filled with greens, and it was easy to sell right out of it at the Dallas Farmers Market. Different times of year, she’d pick poke salad, dig sassafras root and even get mistletoe out of the trees to sell. She was a worker and a businesswoman. 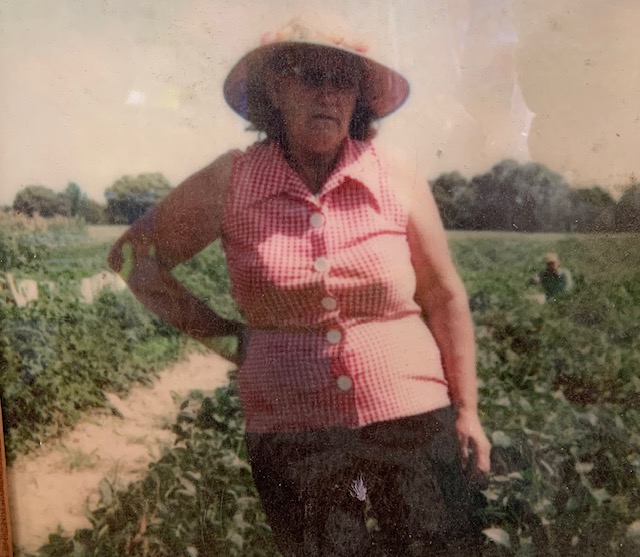 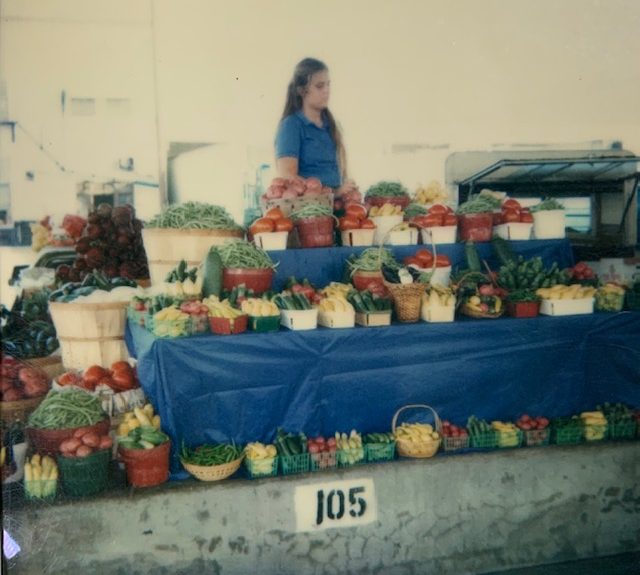 Mom worked for a number of years at the Lee Plant, but later quit to go back to the farm, and I worked too, evenings and weekends. She bought an old Farmall tractor for $100, and Grandpa drove it. When she met and married Frenchie in the 1980’s, they sold mostly in Sulphur Springs. And even after losing Frenchie in 2005 and going through cancer, my mother kept right on going with her produce business. About 5 years ago, I was still working for a grocery chain in McKinney, and I decided I’d better go back home to help her, since I was an only child. That’s how I came back to Sulphur Springs.”

When our cantaloupes come in from Midland, we put them in the blue bin out front, and when people pass by, they know we’ve got em so they stop. Some days we sell 100 melons a day, and we average about 60 a day during the season. So, you see we could not grow that much ourselves and still run the produce stand! On the smaller varieties of watermelons, these are good for the senior citizens because they’re not so heavy. We really care about our customers and strive to stock what they need and want. And they get a lot of joy from shopping in a place where the atmosphere is friendly and reminds them of the country and an earlier era.

Richard and I grew up not far from each other near Yantis, and met again and got married later in life. On our 12 acres, we start in January with onions and after that with potatoes. In our 10×30 greenhouse, we start tomato plants from seed. In fact we start most of our standard summer crops from seed and transplant them. We work a lot and definitely do most of it ourselves, just us two. In the Fall we’ve got pumpkins, gourds and sweet potatoes. And in the early Spring, we’ve got plants and hanging baskets. We sell a LOT of plants at The Produce Stand. Around Mother’s Day in May, the produce season picks up. And our friend Mary Day has been a big help because she does all the canning, pickling and preserving. We’ve always got tempting gifts here to sell, including a line of handmade aprons, and we stock honey, ribbon cane syrup, vanilla and pecan halves. We are so blessed. Coming back to Hopkins County was the best move we even made! 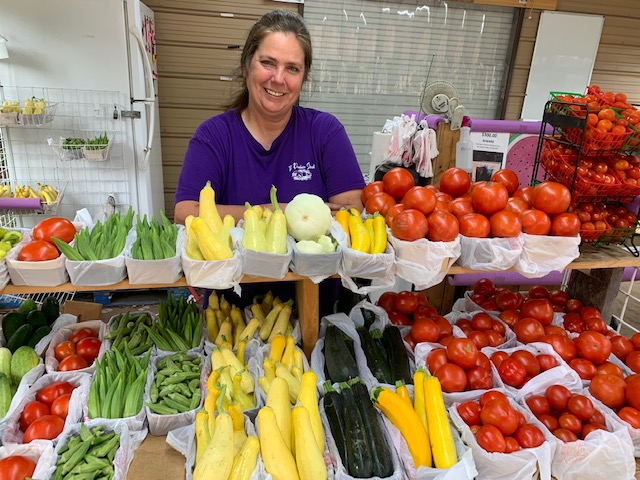