Phil Fugitt, 89, of Commerce was released from this world into heaven on Thursday evening, July 25, 2019 in Greenville, TX.

Phil was born in Greenville, Texas on February 5, 1930, the son of Joe Fugitt and Mildred Duck Fugitt. He received diplomas from Greenville High School, the University of Texas, Austin, and the South Texas School of Law in Houston. Mr. Fugitt served as an attorney in the Greenville area until his retirement from the legal field. Being the unique individual that he was, he did not stop his life after retirement. He continued serving the public by working with H&R Block for many years after leaving his law practice.

Phil was very active in community service, having served as Rotary Club President in Greenville, Lions Club President in Commerce, where he especially enjoyed assisting with the Christmas Food Drive and the Lions Club Carnival. He also served as a school board member for the Greenville ISD. He was also a Life member of the Houston Chamber of Commerce, and voted as an outstanding young man for the Garland Jaycees. He was also an Eagle Scout, and enjoyed supporting the Boy Scouts of America organization. He was a member of the Kavanaugh Methodist Church in Greenville.

Other activities in Phil’s life included being an avid Texas Longhorn fan(“Hook ’em Horns”), watching his grandson play baseball, hunting & fishing in Canada and Colorada, and spending time outdoors feeding the birds, rabbits, and any other varmints that might wander up to his feeding grounds. He also enjoyed planting tomatoes, and loved his cats: Nissian, Tahoe, and Audi.

Mr. Fugitt is survived by his companion and best friend of 40 years, Janna Hammons, two sons: Mark Reece Fugitt of Bedford, Texas and Christopher Curtis Fugitt of Commerce, and his chosen daughter, Wendi Janay Miller and her husband Stacey also of Commerce, and grandson, Jordan Miller of Sherman. Other survivors also include close friends: James Spencer, John and Sandy Overton, Leslie Toombs, and Rosa and Adam Norris. Those preceding him in death include his parents: Joe Fugitt and Mildred Fugitt Titsworth, and two brothers: Joe Fugitt and Charles M. Fugitt. He was also preceded in death by his favorite cat “Aspen”.

Phil’s family would like to express their appreciation for his caregivers: Kim, Carmen, and Edra, and Dr. Rick Selvaggi, and Shannon of Commerce Home Health.

A Service of Remembrance will be hosted by his family on Phil’s 90th birthday, February 5, 2020 at the Jones-Walker Chapel in Commerce. Notification will be given as a reminder on the Jones-Walker facebook page and website as the date draws near. 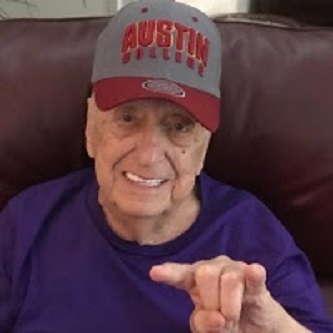