333 College Street…Honoring the History of the Ashcroft House 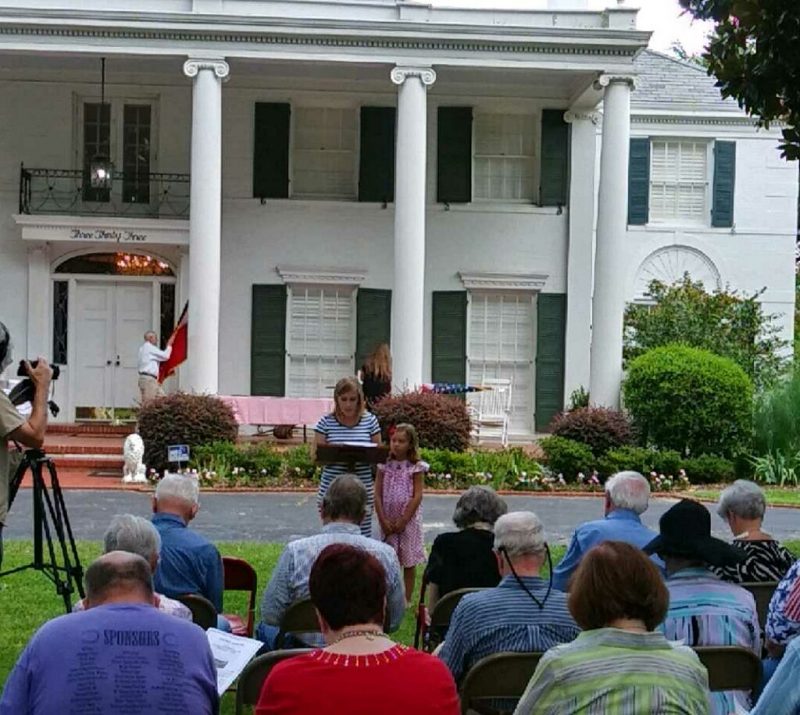 Although numerous Hopkins County locations have been cited with a “subject marker” for historical importance, only two locations can boast a Recorded Texas Historical Landmark. The most recent is the 333 College Street colonial home now owned by Montie and Vivian Monzingo. The recently unveiled marker is located streetside on the southeast corner of the property near the old Houston Elementary School site. The unveiling was held on the lawn on Saturday June 30, 2018 with a sizable crowd of citizens and dignitaries present. Historian Constance McGill read the inscription. Texas Historical Commission Marker Chairman for Hopkins County is John Sellers who emceed the ceremony. 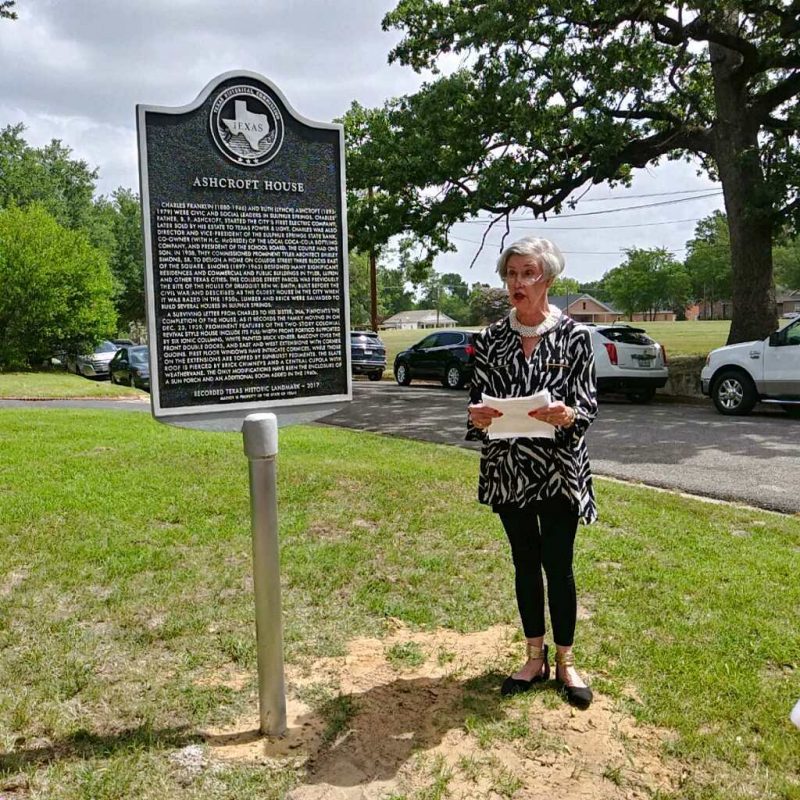 Historian Constance McGill reads the inscription at the unveiling

Montie and Vivian Dennis Monzingo purchased the house and property  in 2015  then retired to Hopkins County permanently in 2016. They had previously owned homes in the Munger Place Historic District in Dallas and on Lake Ray Hubbard at Rockwall. During their working careers, both were math professors with Vivian teaching at Eastfield College and Montie at SMU. Years ago, the couple became members of the Hopkins County Genealogical Society as Vivian’s family has roots in the Saltillo Community. During the process of completing renovations and researching the Ashcroft House, the local Genealogical Society library proved a valuable resource. Not to stand still for long, Montie is now working on two more historical research projects, the Old Saltillo Cemetery and the Jefferson Road which linked Sulphur Springs to Northeast Texas and Louisiana prior to the founding of the Texas Highway Department in 1917. 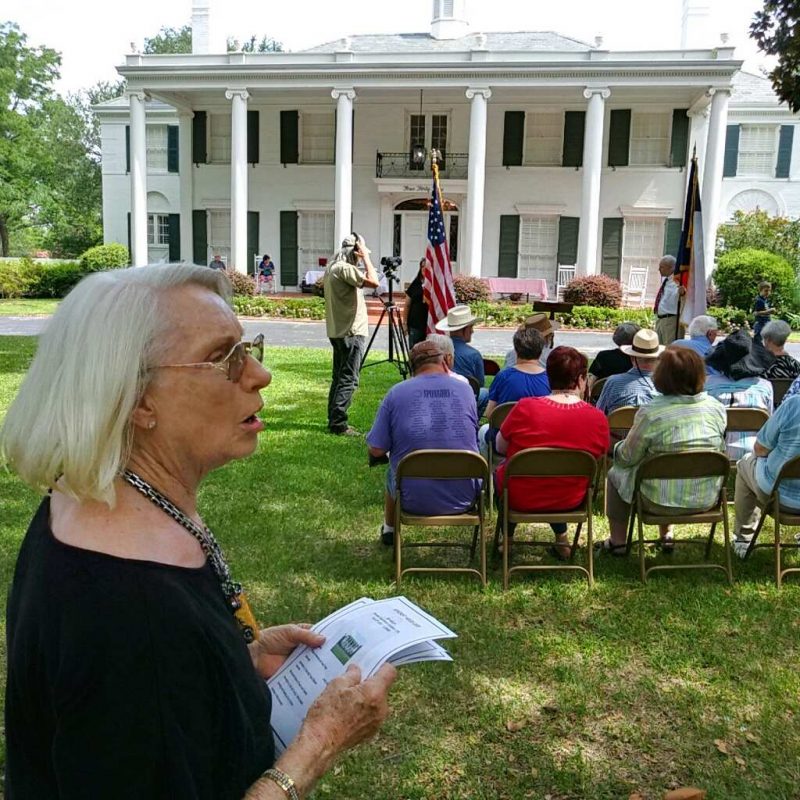 In brief, the Ashcroft House was built by Charles Franklin C.F. Ashcroft and his bride Ruth Lynch, whom he married in 1917. Born in 1880 in Sulphur Springs, C.F. became a civic leader and businessman.  Actually, the property served as the site of three other homes before the Ashcrofts built the current colonial structure 1939. Their only child, B.F. Ashcroft, his wife Denny and their three children later called it home.  Below is a history of the Ashcroft family as compiled by the late historian June Tuck. You can also view a slideshow of historic photos as well as complete video footage of the unveiling event at ksstradio.com

From the files of June Tuck

ASHCROFT, CHARLES FRANKLIN – Sulphur Springs’ most widely-known and esteemed
native citizen, died Sunday, July 28, 1946, at Los Angeles, California, where
he and his wife had been spending their summer vacation. He suffered a heart
attack as he arose from bed and dropped over dead. He had been ill for two
days and had called in a physician who advised him to rest and remain abed
except for meals. He was a member of one of East Texas’ most prominent early-
day families and for many years a leader in banking, bottling, oil and
investment businesses here and over this section of the state. He was past
president of the Texas Society for Crippled Children and devoted much time to
this work. A frail man early in life, he was never really robust, but he was
energetic and enjoyed contributing to the happiness of others. With him at the
time of his death was his wife. A neice, little Miss Ruth Berry Ashcroft,
accompanied the Ashcrofts to California. Also in California were his sister,
Miss Ina Ashcroft, and Mrs. Carl Stirling and Mrs. Ada Cain of Sulphur
Springs. His son, B. F. Ashcroft, and a nephew, Enos L. Ashcroft Jr., flew to
Los Angeles after hearing of his death.

Mr. Ashcroft was born February 12, 1880, the son of B.F. & Lyda Higgins
Ashcroft in Sulphur Springs. He was educated in local public schools and later
took a business course. For a short time he was a court reporter at Greenville
and then returned home to become bookkeeper of his father’s electric power
plant. He was married to Miss Ruth Lynch at Lufkin on October 11, 1917. Their
union was blessed with one son, B. F. Ashcroft. Following the sale of the
Ashcroft Electric Power Company to Texas Power & Light Company in 1928, Mr.
Ashcroft continued to expand his business interest. He became a director and
vice-president of the Sulphur Springs State Bank, co-owner of the Sulphur
Springs Coca Cola Bottling Company with H. C. McGrede, and engaged in the oil
business in the Hawkins field. He also was a director of the Sulphur Springs
Loan and Building Association. A truly great civic leader, he was connected
with practically every worthwhile project ever undertaken in his home town. He
was president of the Sulphur Springs School Board and guided it successfully
during the dark days of the depression when many schools were forced to close
because they were unable to pay teachers. At one time he borrowed money on his
personal note to pay the teachers here. For more than 40 years he was a member
of the Board if Stewards of the First Methodist Church. At the time of his
death he was Sulphur Springs’ District Chairman of the Golden Cross for the
Methodist Church, a member of the Board of Trustees of the Methodist Hospital,
and a district steward in the Methodist Church. He was past president of the
Texas Society for Crippled Children, past president of East Texas Chamber of
Commerce, past District Governor of Rotary District 128. Also past president
of Sulphur Springs Rotary Club, a past Noble Grand of the I.O.O.F. and Master
Mason. He had served as president of the Chamber of Commerce on more than one
occasion. He was serving as a member of the board of regents of Texas State
College for Women, Denton, at the time of his death. He directed the various
bond drives during the war. He always aided with Red Cross, Community Chest,
U.S.O., and other fund-raising drives to help his fellow-man. Immediate
survivors include his wife, a son, a brother, Enos L. Ashcroft, and a sister,
Miss Ina Ashcroft, all of Sulphur Springs, two brothers, Rodney and Raymond,
died a number of years ago. The body arrived via plane at Dallas and was
brought to Sulphur Springs by Tapp Funeral Home attendants. Final rites were
conducted at the First Methodist Church, conducted by Rev. J. Daniel Barron,
assisted by Rev. Henry Mood of Bonham and Dr. Claud M. Simpson, district
superintendent. (Buried in Sulphur Springs City Cemetery)