He became a member of the Hopkins County Sheriff’ Posse and found a love for law enforcement. Now, Sheriff Lewis Tatum wants to return the local posse to activities that were a part of its beginning. The Sheriff addressed the posse at their 30th Anniversary Chile Luncheon and Swearing-in Saturday, January 13th. 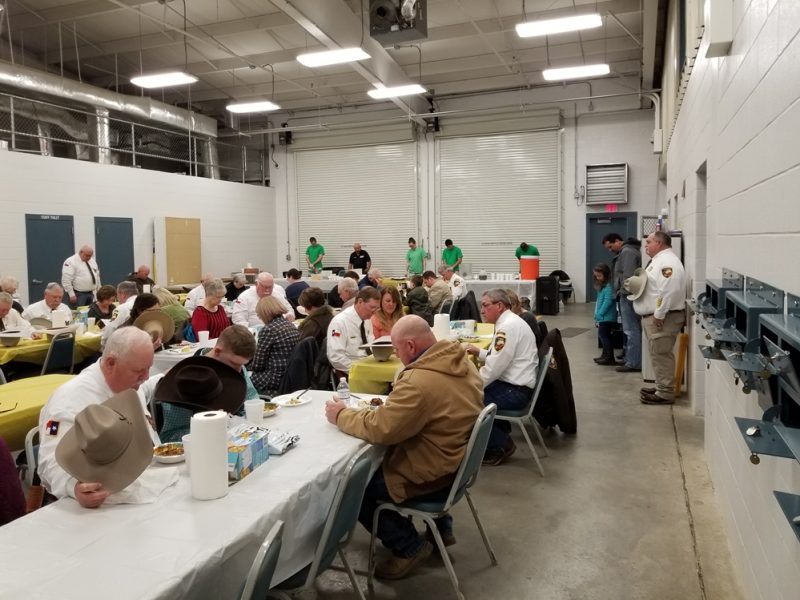 In the warmth of the Sally Port at the Hopkins County Jail, the men and women members of the Sheriff’s posse celebrated the over 30 years of continued service to the county. The Hopkins County posse was organized October 31, 1987, and operates, under the authority of the sheriff and by a set of by-laws, as a support to all law enforcement agencies upon request and approval by the sheriff.

Sheriff Tatum said he plans to revitalize the use of the posse in manhunts. He noted that with the use of the new drone at his department, the posse can be a greater help as they man the perimeters of the search. He is also asking members of the posse who have hours available during the day to attend various court trials to learn what both prosecution and defense attorneys look for as they try a case. He wants them to become more alert to evidence and methods used as they arrive on the scene of an incident being investigated. He also wants certified officers to take academy students on ride along to observe basic patrol and to create a stronger law enforcement presence during certain hours. The Sheriff’s Posse serves at no cost to tax payers with each member responsible for his own expenses.

The Hopkins County Sheriff’s Posse began when Highway Patrolman Roger “Tex” Maynard and Deputy Ken Wisdom began discussing the organization of a horse-mounted posse. They approached then Sheriff Mark Bassham with the idea. He conferred with other sheriffs who had a posse in their jurisdiction. Bassham agreed to the idea. The posse would be comprised of a maximum 40 members of good moral character, with no criminal record, and an interest in support of Law Enforcement. The members must have a horse and transportation for it. The first members of the Hopkins County Posse were bankers, law enforcement officers, business men, blue collar workers, and several retired individuals.

The first members were sworn in when they met on Halloween night October 31, 1987 at Aiguier Cemetery.