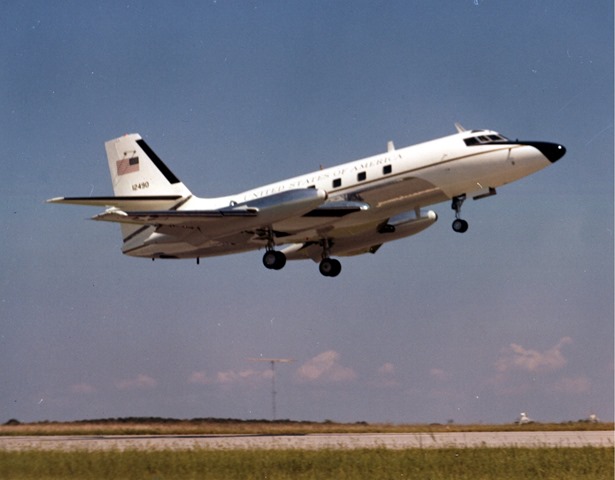 The in flight photo is one of the paint schemes when the airplane was in the contract at E-Systems, Greenville, TX starting in 1973 until all VC-140Bs were retired in the late 1980s. It is now a Piece of flying history at LBJ ranch. VC-140B 61-2490 Lockheed JetStar flew in and out of Lyndon Johnson’s ranch when he was vice president and president in the 1960s. The 13-passenger plane is sometimes referred to as Air Force One Half.

This historic JetStar is on permanent exhibit at the LBJ ranch in the Hill Country. The ranch is a national park 65 miles west of Austin and open daily for self-guided driving tours and a guided tour of the Johnson ranch house.

The National Park Service rescued the 50-year-old JetStar from the Pentagon’s “bone yard,” an open-air retirement home for more than 4,400 old planes in the dry, desert air of Tucson, Ariz. The government paid $261,000 to bring the plane to Texas, to provide shelter and to restore the exterior of the VC-140 Lockheed aircraft with a sparkling new paint job that replicates the outside of Air Force One.

Records show it logged nearly 17,700 flight hours during its 22 years with the Air Force.

The jet was dismantled for the 2 1/2-day drive to Texas. The fuselage, wings and fuel tanks, tail section, and four engines rode in a convoy of flat-bed trucks that traveled on Interstate 10 for most of the 1,180-mile trip. The JetStar, which could fly as fast as 605 mph during its working days, made the highway trip going only 60 mph.

The 20,627-pound empty plane was put back together at the LBJ ranch. They used a truck-mounted crane to lift the wings, tail section and other parts onto the fuselage. The work took place on the south end of the runway at the ranch.

It was towed about 300 yards to the ranch tarmac, where a shelter with a galvanized steel roof and open sides protect it from bad weather. The 24-foot-tall shelter was built in the same spot where the JetStar rested when it was at the ranch in the 1960s. The old tie-downs are visible.

LBJ traveled on a Boeing 707 for most trips when he was president, but he also had a fleet of smaller planes available to him, including several JetStars. The larger plane could not land at the ranch because the 6,300-foot asphalt airstrip was not long enough. However, a JetStar could land and taxi to within 200 yards of LBJ’s so-called Western White House along the Pedernales River.

The plane was a flying ambulance at times. It was dispatched by LBJ at least twice in the middle of the night for emergency medical missions. Johnson sent his doctors in the JetStar to assist former President Dwight Eisenhower, who had suffered heart pains in Georgia in November 1965. Cardiologists also scrambled to board the plane in August 1966 to treat the gravely ill president of Nicaragua, René Schick. The Central American leader died while the JetStar was still in the air.

The JetStar that is at the LBJ ranch made some memorable trips.

One trip left it stranded in Florida because of mechanical problems. Johnson’s labor secretary, W. Willard Wirtz, flew to Miami on July 28, 1964, but had to return to Washington on a commercial flight because the JetStar’s “battery blew up,” LBJ Library records show.

Ellsworth Bunker, then-U.S. ambassador to the Organization of American States, used the plane several times to fly to the Dominican Republic, where U.S. troops had rolled in to try to quell an uprising in 1965. Bunker mediated an end to the rebellion.

On March 13, 1965, U.S. Attorney General Nicholas Katzenbach requested the JetStar take two of his assistants to Selma, Ala., to help with peaceful negotiations in the aftermath of “Bloody Sunday,” a violent confrontation between state and local law officers and 600 civil rights protesters trying to march from Selma to Montgomery. Police had used tear gas, dogs and clubs to beat back the protesters just six days earlier.

The JetStar also became a favorite of many entertainment legends, including the likes of Howard Hughes, Bob Hope and Elvis Presley. Presley dubbed his “The Hound Dog”. Howard Hughes personally piloted his JetStar around the world. Howard Hughes owned several keeping them in a hangar at Lockheed in Marietta, GA. The JetStar even made it onto the silver screen as Pussy Galore’s jet in the James Bond classic Goldfinger.