The Wildcats play Lovejoy Friday at Prim Stadium in a bi-district match and the Leopards head coach is Todd Ford, in his second year. The former University of Texas quarterback in the `90s was the offensive cooordinator for Coach Todd Dodge at Southlake Carroll and the University of North Texas. Coach Ford also built the program at Round Rock Cedar Ridge leading them to the playoffs for three straight years before coming to Lovejoy. 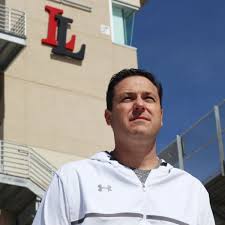 This year Lovejoy is 5-5, just like the Wildcats. They lost five but have won the last five. Plagued by injuries and a tough schedule that include playoff teams Argyle, Frisco Wakeland, Frisco Lone Star and Highland Park, the Leopards went 0-5. After a bye week, they got healthier and have won five straight including victories over playoff teams North Forney and Mesquite Poteet.

Lovejoy’s quarterback is Carson Collins, who was injured early. Coach Ford said he is benefiting from starting ten games last season as a sophomore. Receiver Chase Van Wagoner is heading to TCU. On defense, the Leopards leader is Arkansas commit Bumper Pool, their senior middle linebacker. Coach Ford said the Wildcats are well coached and they are playing very hard. He said the Wildcats are also on a winning streak and are playing with confidence. Coach Ford said the opportunity is there for a really good football game to take place Friday night.