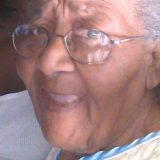 She was born on January 27, 1930 in the East Caney Community of Hopkins County, the daughter of Lank and Leona Lee Harrison. She married Homer Ray Golden, he preceded her in death in 1982. She worked as a cook at various restaurants from Kansas and Texas. She was a member of Morning Chapel MCBC.