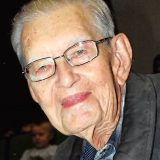 Celo was born January 16, 1928 in Dewey County, OK.  Celo was the son of Leslie Ferguson and Elsie Marie Webb Ferguson.  He married Betty Jeanice Newsome on August 19, 1948 in Wheeler, Texas.  She survives. Celo served in the U. S. Army.  He was a machinist for Texas Instruments for many years.  Celo was a member of Central Baptist Church in Sulphur Springs.

He is preceded in death by his parents.