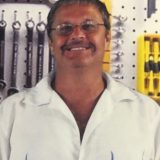 Ronnie was born on September 21, 1969, in Ft. Worth, to Russell Edward and Rebecca Sue Robbins Ramsey.  He had a son, Riley Roy Ramsey whom he loved very much.  He was a very hard worker all of his life.  The last job he held was in new home construction as a carpenter.

Survivors include: Sisters: Ronda Ramsey of Ft. Wayne, IN and Robin Roden (Charles) of Saginaw;

Cremation arrangements are under the direction of Wilson-Orwosky Funeral Home of Emory.

Please sign the online guestbook for the family at www.wilsonorwoskyfuneralhome.com.