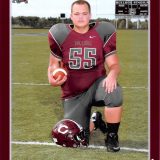 He was born on December 21, 2000 in Sulphur Springs, TX, the son of Thomas Lincoln Withrow and Brandy Cox Withrow. He was a student at Cooper High School where he loved to play football and also did powerlifting.

He was preceded in death by grandparents, Teresa Hammons, Jack Withrow, and great-grandparents, Leland and Jackie Wesson.

Arrangements under the direction of West Oaks Funeral Home.