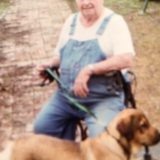 James Houston McIninch was born on April 22, 1932 in Atoka, OK, the son of Jesse Lee and Ruby Bell (Butler) McIninch in Atoka, TX. He married Lillie Miller on August 28, 1951 and was married 65 years.  Houston was a member of Prairieville Baptist Church, the Teamsters Union and drove trucks for A&P Trucking and Safeway.