In the continued search of the City of Sulphur Springs for an organization to manage and produce the “Reds, Whites, and Brews” event on Main Street and Celebration Plaza each May, the City has turned to a new organization, the Buried Bones Foundation. City Manager Marc Maxwell said the city does not wish to run an event but to provide a venue and have another staff, plan, and promote the event. He believes Buried Bones is a great fit.

Last year the Hopkins County Fall Festival Board was responsible for the event. The city decided not to continue with the Festival Board. Enter Art Foster, Jr. and Matt Dunn who quickly formed Buried Bones Foundation. Foster is well known in the area for his knowledge of craft beer. Foster owns Foster’s Place, a popular pub for Hopkins and Wood Counties residents. Some would say that Foster knows more about craft beer than anyone in the area. His venue provides music and “stout” conversations every weekend. Both have stated they will take no paycheck on their part. The money made on the event will go to both the Sulphur Springs Animal Shelter and Hearts of Life Animal Rescue. 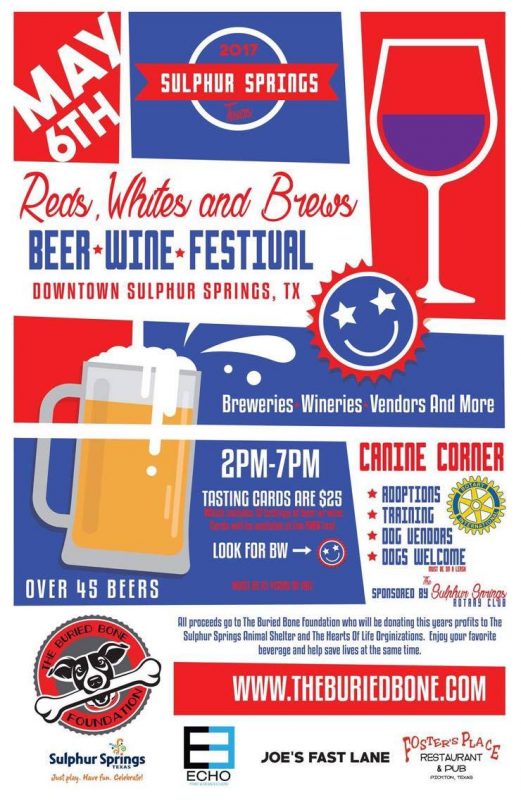 Along with Buried Bones, the local Rotary Club will be involved this year. They will sponsor and work “canine corner”. Neva Mohesky and other Rotary members will be in charge of that addition. Mohesky said, “The Rotary Club had been in discussions to do a dog festival and when we found out about the Buried Bone Foundation, we offered to help bring dogs to their event. The groups will set up on Main Street in front of Muddy Jake’s, whose mascot is a dog, and the Sulphur Springs Animal Shelter will be combining their regular adoption events into this event exclusively.”

According to a representative of Hearts of Life, they, too, will host adoptions for animals in their care.

Also, the new chapter of Love On a Leash Pet Therapy will be set up with information regarding pet therapy recruitment and potential agencies needing services. Lake Country Ladies rescue group will also have dogs available for adoption.

Last year some 20 craft beers were offered. This year over 40 craft beers from 11 breweries, five wineries offering a variety of wines and one cidery with various hard cider options will be represented.  Popular local music artist Dubb Williams has agreed to perform. Williams has performed at a number of venues from Dallas to Oklahoma to the local area.

A local blogger, formerly affiliated with the Fall Festival Board, began using social media to attack the event this week. He raised questions regarding Buried Bones stating that they are a nonprofit foundation. City Manager Maxwell pointed out that having a nonprofit organization has never been a criteria for Red, White, and Brews. He stated that the foundation’s decision to give the proceeds from the event to animal care is their choice. The city is only a source for the event and the place where the event is held. He stated that the city has only looked for someone to produce a good event that will provide a successful event year after year. The city has already provided the legal requirements and will guide in providing a public place within the bounds of state and local laws for the event.