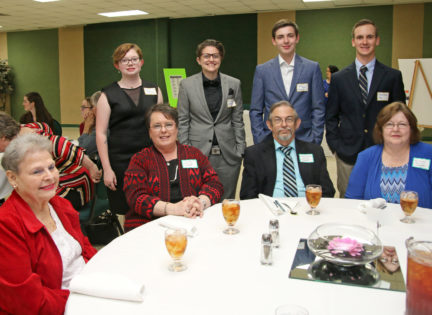 Paris Junior College brought scholarship donors and recipients together recently at a banquet in the PJC ballroom. The dinner offered an opportunity for students and donors to interact with each other.

“If it were not for you, our students would not be here tonight and many of them would not be attending college here at PJC,” Dr. Pam Anglin said as she addressed the donors at the dinner.

Dr. Anglin continued: “I want to thank our students because the best days I get to spend are when I get to sit and talk with them. When you sit down with a group of our young people, our PJC students, you realize this country is going to be in good hands.”

The PJC Memorial Foundation has over $20 million and has annually awarded five percent of the interest earned to PJC, allowing PJC to give $1 million annually. The Foundation has provided that amount in scholarships for the last four years. Dr. Anglin thanked the donors for making that possible.

“Like a lot of kids coming out of high school, we didn’t have a lot of money,” said PJC student Robert Robles of Greenville, the recipient of the Leroy Whitaker Endowed Scholarship. “We’re not dirt poor but there’s not a lot of money in the bank. It meant a lot that someone actually invested in me. Words can’t explain how that really helped me out that someone believed that I could do something good and put money to that.”

That sentiment was echoed by other students who spoke, including Sydney Chadwick, Kristen Hodges and Shawna Bryant.

Two donors took the podium to share their PJC stories. First to address the audience was Eleanor Crawford, who created an endowed scholarship in memory of her son, James “Eddie” Edward Thomas, Jr. Crawford retired after serving as human resources director of Campbell Soup for many years. After graduating from Paris High School, her son joined the Navy and served as a medical corpsman. He then pursued his dream of becoming an emergency medical technician/paramedic.

“It’s important that the donors and the recipients get to know each other,” said Crawford, “because we’re connected and always will be. And also it gives me a chance to tell you a little about my sweet Eddie and how we got to where we are today.”

Crawford said her son enrolled in the EMT program at Paris Junior College following his military service. At the time she asked him why not go to medical school to be a doctor and make a lot more money and he told her that it was not about money.

“I was never prouder of him than at that moment,” said Crawford. “He loved his work.”

She relayed how he tried to help a young man at an accident scene and came in contact with a high voltage line and lost his life.

“After his death I wanted to be sure that other young people who pursued that path had an easier time than he did. At one time he was working at an auto parts’ store during the day, going to school at night and doing his clinicals on weekends. I thought if we can make it financially easier for another student, that would a good thing and Eddie would like that.”

Next to speak was Dottie Thielman, who has been a student, librarian, and dean at PJC. She retired as Dean of Instructional Support Services in 1982, and has remained involved with the PJC Alumni Foundation for many of the years since. Theilman was named PJC Distinguished Alumna in 1996, and has endowed scholarships in the names of her parents, husband, sister, and now her son, Albert.

“This is a wonderful occasion,” Thielman said. “I enrolled in 1936 and it was known then to many as the ‘Concrete Campus’ downtown. I don’t think there was a blade of grass anywhere. I became the PJC librarian in 1941. I had 41 years of service after that and retired. So all my life has been Paris Junior College, and it has been a wonderful life and I thank you.”

For more information about the Paris Junior College Memorial Foundation or to learn how you can create an endowed scholarship fund, contact Institutional Advancement/Alumni Affairs Director Derald Bulls at 903-782-0276 or [email protected].