At the NETBIO March sale held on Wednesday at the Sulphur Springs Livestock Auction, producers offered 7,269 head of calves and yearlings for sale. It was the largest March sale held since NETBIO began its producer program in 1998.

While the number of cattle set a record, it can also be noted that the price of cattle improved on sale day. “This sale gave us the best market prices we have had in a long time,” said market co-owner David Fowler. 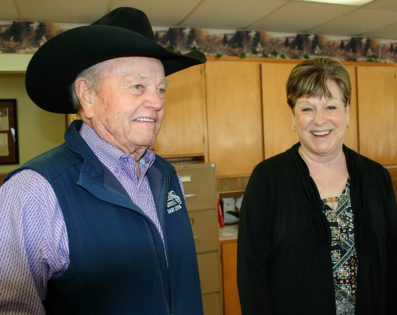 For the second sale in a row, producer participation set a new record as 312 producers consigned and shipped cattle to the sale. Fowler said more and more cattle producers are getting in the NETBIO pre-conditioning program, “and they are doing a good job of getting their cattle ready for the sale,” he said.

He pointed out that 39 buyers were on hand for the sale and added that most of the large feedlots had representatives here for the sale. In addition, a large number of buyers participated in the sale over the Internet. 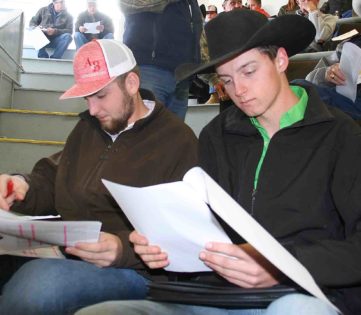 Two young cattlemen, Connor O’Bryan, left, of Cooper, and Cade Goldsmith of Sulphur Springs look over the sale sheets before the auctioneer begins the NETBIO sale. They both had cattle consigned to the sale.

There was good interest in all classes of cattle, and replacements of good quality were snapped up in a hurry. Lightweight grazing cattle brought a big premium. Buyers paid an average of $786.10 per head for all cattle sold.

Before the sale began, Sulphur Springs Livestock Commission co-owner and auctioneer announced to the capacity crowd that NETBIO and Farm Bureau has joined forces to begin a relief fund for the ranchers and farmers in the Texas Panhandle who lost cattle, pastures, fences and in some cases barns and homes in the recent wildfires that burned thousands of acres.

“We want to raise funds so we can purchase and send fencing materials and other supplies to those who have suffered losses,” Pogue said. “We have learned that some of the victims of the fires are NETBIO members — cattle producers who have bought or sold their cattle at our sales.”

One producers selling cattle Wednesday donated the profits of one calf to help launch the relief fund. The calf brought $757.71 and they had add-ons of $320, for a total contribution of $1077.71.

Pogue said the Sulphur Springs Livestock Commission is a collection point for donations, along with the Farm Bureau. Just make checks payable to the NETBIO Relief Fund.

Northeast Texas Farmers Co-op has joined NETBIO and the Farm Bureau in the relief effort and will make arrangements to ship the materials to the Panhandle when they are purchased.

The next NETBIO Pre-conditioned Calf and Yearling sale will be held on May 17 and Fowler encouraged producers that are getting cattle ready for that sale top get their consignment in now and pick up their tags to avoid a possible cutoff. Books have been closed early on the last two sales, which occurs when consignments reach 8,000 head.

The NETBIO Pre-Conditioned Stocker and Feeder Calf Sale gives producers a market to offer their pre-conditioned calves and yearlings in load lot quantities. NETBIO holds six pre-conditioned calf sales per year, which is the marketing arm for members of the organization. 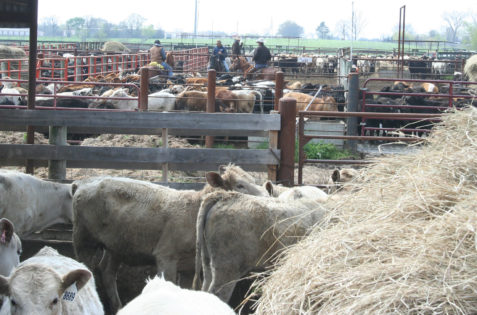 Cowboys move cattle into the pens to prepare for the March NETBIO Pre-conditioned Calf and Yearling Sale held Wednesday at the Sulphur Springs Livestock Commission.