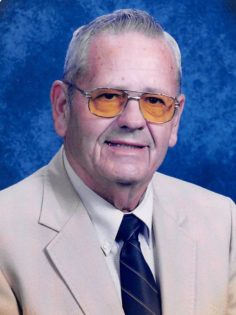 Mr. Cooksey went to be with his Lord on Saturday, December 10, 2016, at Carriage House Manor.

He was born on July 6, 1935, in Goree, Texas, to Ballie Oretha Yates Cooksey and William Melvin Cooksey. He married Jossie Virginia “Ginger” Hammons on August 11, 1962. Mr. Cooksey served in the United States Army and National Guard for 20 years until he retired as Lt. Colonel. He received a bachelor’s degree from Hardin-Simmons University and a master’s degree from Texas Women’s University. He was a teacher and school administrator for more than 50 years: high school principal in Seymour, Texas for the majority of his career. He had a lifelong passion for horses, calf roping, and bird hunting. He was also dedicated to serving his community as a Master Mason.

In lieu of flowers, the family requests donations be made to Cal Farley’s Boys Ranch, www.calfarley.org/boysranch.

Arrangements are under the direction of West Oaks Funeral Home,