Celebration Plaza was filled with Christmas lights and revelry Friday night both before and after the Lions Club and City of Sulphur Springs Lighted Christmas Parade. Prior to and following the parade, live music from the sound stage, multiple vendors, and a snow slide provided a variety of opportunities. The evening began with a tree lighting ceremony.

The parade, broadcast on KSST and videoed for replay on Suddenlink Cable Channel 18 and ksstradio.com, brought 20-minutes of light and action to the streets from Buford Park to Celebration Plaza to Houston Street.

Lights of all colors festooned vehicles, floats, musical instruments, and those walking in the parade. Businesses, social organizations, schools, and churches were represented. The Lions Club float feature the face of a Lion. The float was drawn by a utility vehicle driven by Garret Glass and his wife, Sulphur Springs Mayor Emily Glass.

Both the Sulphur Springs High School Marching Band and the Como-Pickton War Eagle Marching Band provided music from instruments outlined by lights. For most band members, their hats were also covered with lights. Charles McCauley, SSHS Band Director, road a motorized vehicle that was lighted and also sported reindeer antlers.

According to Lions Club member John Campbell, prizes for parade winners will be awarded at noon Tuesday at Pizza Inn during the club’s weekly meeting. 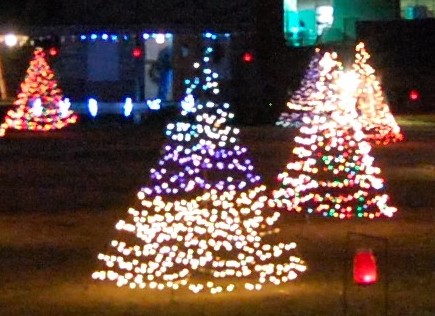