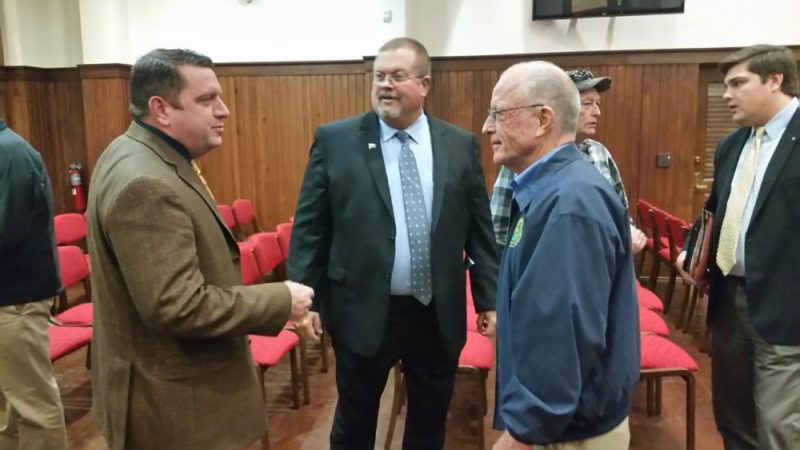 Texas State Senator Robert “Bob” Hall addressed approximately 25 people Thursday afternoon at a Town Hall in the Council Chambers of Sulphur Springs City Hall. Hall told the small gathering that he and his staff will promote conservative principles during the 85th Legislative Session of the Texas Senate. Hall addressed specific pieces of legislation and answered questions from those present. Those who spoke seemed to have come with their own agenda of legislative needs that had not been addressed by Hall.

Hall told KSST News that in the Town Hall meetings already conducted the questions regarding property taxes are gaining momentum and are now ahead of boarder security. Protecting the electrical grid is also high on the list of concerns. He said boarder security is a concern and most of the district awaits the federal government’s decisions and steps taken to secure the borders. Regarding property tax, Hall said the tax is growing in many areas and that growth must be changed. The electrical grid’s vulnerability to terrorist attack and the affect that would have on daily life in the state is also high on the list of calls to his office.

He noted no new issues have been brought up. He said many are wondering why the security of women and children in the bathroom is an issue. He stated that their safety should be secure and without question.

At the local Town Hall meeting, a retired policeman and military veteran questioned the legislation regarding educational assistance for veterans and their children in Texas. Hall responded that the legislature would seek to restore the assistance after a veteran moved to Texas from another state and was refused the funding. Hall noted that the bill was passed for Texas veterans but not for those who move to Texas to take advantage of the funding. An educator questioned certain segments of House Bill 5 that denied certain certification to students who passed the local school curriculum but did not pass the state’s standardized test. Hall referred both questions to his staff.

Hall said that he would be guided by five qualifying questions for each piece of legislation analyzed. He asks, 1) “Is it constitutional?”; 2) “Does it support a core function of government?”; 3) “Does it increase personal liberty, free enterprise, personal responsibility, or property rights?” 4) Will it decrease spending, taxes/fees governmental control, regulations, or federal overreach?”; and 5) “Is it right for a moral person?”

He addressed specific legislative pieces. Life After Roe (SCR 9) is a proposed constitutional amendment to give full constitutional protections of the right to life to the unborn under the Texas Constitution. Veteran Homestead Exemption (SB 97) would apply the homestead exemption to the disability application file date and create a remedy for the federal government’s multi-year veteran disability application wait times. Title Insurance (SB TBD) will completely regulate the title insurance industry, which includes setting a fixed price and fixed level of coverage. Intrastate Commerce (SB 92) will set regulatory certainty for businesses as they seek to expand throughout Texas. Red Light Camera Repeal (SB 88) would prohibit counties, municipalities, school districts, and state agencies from using or operating photographic traffic signal enforcement systems and prohibit the entities from issuing a civil or criminal charge based on evidence from such a system. The Civil Asset Forfeiture (SB TBD) would require that property cannot be forfeited without a criminal conviction.

He also addressed securing the Texas Electrical Grid (SB 83); Maintaining the Rule of Law on Texas Boarders (SB TBD); Self-Defense Security Zones (SB 86) providing immunity for business and property owners from civil liability if a carry license holder is injured on their property from gun-related violence; Election Integrity (SB TBD); Repeal Driver’s Responsibility Program (SB 90) which would repeal the program which prevents a person from having his or her driver’s license suspended for mere failure to pay a surcharge; and Transportation Expiring Revenue Enhancement Bill (SB 84) which would create a new financing mechanism for design-build highway projects by TxDOT providing an alternative source of financing to the construction of toll roads.