The Wildcats’ marching band earned first division ratings from three judges at a band contest in Commerce Saturday. Band Director Charles McCauley said the band was cheered on by a large number of supporters. He indicated the band again had their best performance of the year Saturday, full of energy with good tempo.

Despite the top rating, McCauley said the mostly complimentary judges did find some areas that could be improved. He said these included things such as posture and alignment. These was the second year in a row for the Wildcats’ band to attend the Commerce contest. McCauley said some band members might have been disappointed since the band was not able to duplicate last year’s accomplishment of earning top band in their division and top band overall. McCauley said the judging was very fair and he called the panel extremely good. McCauley did say the band was out of its’ routine some Saturday. They are used to performing after a Friday night game that they didn’t have this past Friday. Plus the performance took place quite late, at 8:10 p.m. They were the last band to perform.

Tuesday the band will perform in UIL competition at 4:30 p.m. at Sam Parker Stadium in Mt. Pleasant. The marching contest is the first leg toward sweepstakes. Sweepstakes is earned with first division ratings in marching in the fall and on stage concert and site reading in the spring. 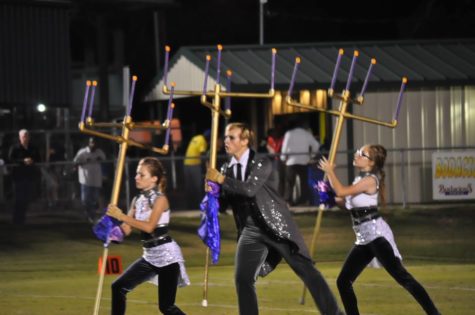