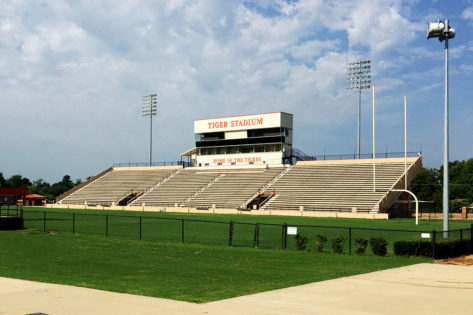 The Wildcats play at Texas High Friday night and the Tigers are coached again this year by Barry Norton, now in his eighteenth year. He took over when the program was struggling and Coach Norton has turned the Tigers into a perennial playoff team. Despite his team’s 5-0 record, 1-0 in district play and a #8 rating in the AP Poll, Coach Norton says his team has a long way to go to be a good team. He says the offense has the potential to be very good. Meanwhile he says the defense just needs to keep plugging along. They have 11 new starters on defense. Coach Norton calls them a no-name bunch but he adds they are playing hard and getting better. Despite being a little smaller than most Texas High defenses, Coach Norton says his defense is quick. After allowing Marshall lots of yards on the way to an 18-0 Mavericks’ lead, the Tigers shut down the Mavericks the rest of the way in a 36-18 Tigers’ win. The Tigers have a three year starter, Cade Pearson, at quarterback. He’s a North Texas commit. Coach Norton says you can’t replace experience. He says receiver Quan Hampton is as good of a player as there is in the district. Coach Norton says the Tigers line has been solid. They also have two very solid running backs and a second outstanding wide receiver. Coach Norton says he respects the Wildcats and their ability to move the football and score points. He notes that quarterback Ryan Humphries has thrown for over a thousand yards. He calls the Wildcats’ defense an attacking defense. Coach Norton says a Greg Owens coached team will always play hard. He expects a real competitive Wildcats team to come to Tiger Stadium Friday night.

Wildcats Football Coach Greg Owens started his media gathering Wednesday morning by saying the loss last week to Marshall was still bothering him. He said he remained concerned about some things the team needed to do better. Still Coach Owens said the team was continuing to get better and he added he could see it on tape. Coach Owens noted his team was 1-1 in district play with a tough opponent on the schedule, Texas High, on Friday. He said he looked at the game as an opportunity. It’s not lost on him that Texas High was ranked number 8 in the state. He said they are as good as they have been in a long time on offense. Coach Owens talked about the Tigers top two running backs, their top two receivers, their offensive line and quarterback Cade Pearson, who is committed to North Texas. Coach Owens called the offense the strength of the team. He said the key to the game was for the Wildcats offense and the offensive line to control the ball to keep it out of the hands of the potent Texas High offense. Coach Owens said he was hoping for some turnovers as well. He said Texas High, under Coach Barry Norton, in his 18th year, liked to run first to set up their passing game.

Wildcats Offensive Coordinator Matt Young says the Wildcats are improving on offense. He says they were better last Friday than when they played Whitehouse at home a couple of weeks ago. Coach Young says he’s hoping the offense can build on that improvement. Concerning the Texas High defense, Coach Young they are good as always but in a different way. He says the Tigers defense has no standout. He calls them eleven really good high school football players. Coach Young says they are undersized by Texas High standards but adds they make up for it with quickness. He says when they see something, they react at full speed.