From the Floor of the Republican National Convention; Wisenbaker’s Views of the Convention

Home » Featured » From the Floor of the Republican National Convention; Wisenbaker’s Views of the Convention 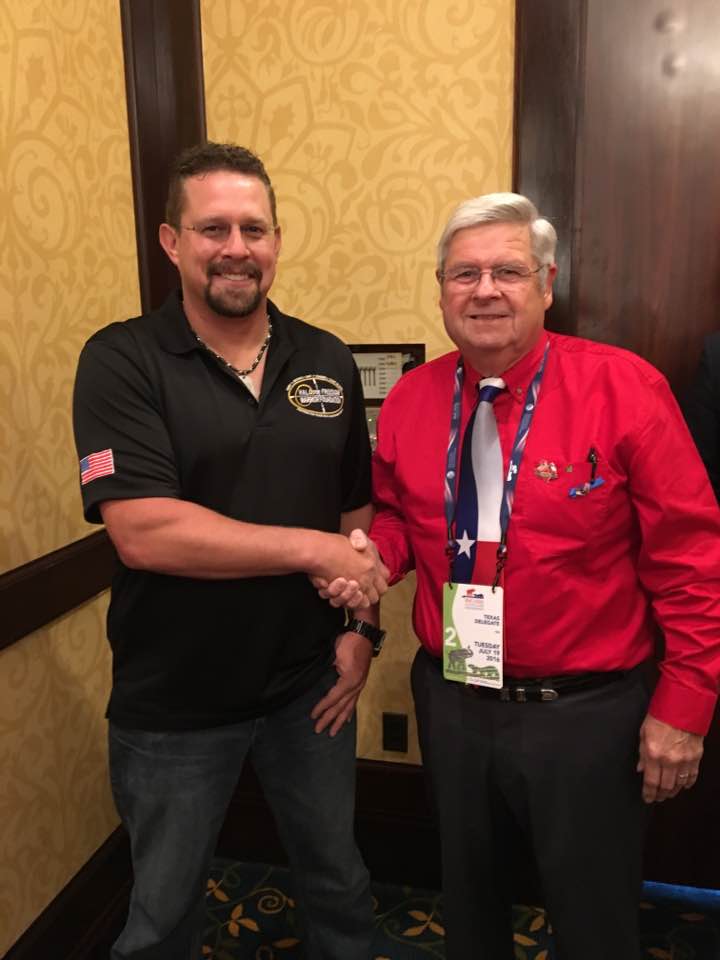 John “Tig” Tiegen, left, one of the survivors of the Benghazi incident and Donnie Wisenbaker at the Republican National Convention

“We’re taking care of business that needs to be taken care of” is how Hopkins County’s Donnie Wisenbaker describes his Monday at the Republican National Convention. He said the 10 minute publicized floor furor was a blip on the screen of the seven (7) hours of business conducted during the day and evening Monday. Hopkins County Republican Chairman Donnie Wisenbaker is a delegate to the Republican National Convention taking place in Cleveland, Ohio this week.

In conversation with KSST News, Wisenbaker described  the events of the day saying that there were  some rules “… some of us didn’t care for.” It was that set of rules that created the 10 minute furor. He said the delegations have the opportunity to call for a roll call vote rather than voice vote but that requires seven (7) delegations to present petitions calling for a roll call vote. At first, nine (9) delegations had presented petitions calling for a roll call vote on the rules. However three withdrew early and two additional delegations withdrew their petitions prior to the voice vote on the floor of the convention. There were Texas delegates that desired the roll call but the Texas delegation could not gain enough signatures within the group to present a petition. Wisenbaker did note that to the ears of those who wanted a roll call and not a voice vote on the rules, it sounded like there was probably two-thirds of those present who voiced “No”. However, the chair ruled in favor of the “ayes”. The difficulty arose because “Losers don’t take losing well in politics” According to Wisenbaker. He said there isn’t a big division, it is just politics. He said the problem stemmed from the fact that all of this was not explained to the convention. For the Texas Delegation, the explanation came during the Tuesday morning caucus.

Wisenbaker said when there is no controversy, some try to manufacture it. He stated that the Texas delegation is unified on the Party Platform that is being presented and the choice of Mike Pence, Governor of Indiana, as the Vice-Presidential running mate by nominee-apparent Donald Trump had also solidified the delegation regarding the nomination of Trump. He also referred to Hillary Clinton as the potential competition and that “…she isn’t qualified for President…” as having unified the delegation.  He also noted her failed foreign policy and the total failure of the current administration as reasons for Republican unity at the convention.

“Cleveland is a lot being in East Texas, super friendly people,” stated Wisenbaker. He said security is unbelievable. Security presence is great. He pointed out that police from across the country and federal agents are ensuring the political process is going onward. He said he doesn’t feel the least bit apprehensive. Police are everywhere and when you walk down the street, there are two or three policemen walking with you simply because there are so many.

Speaker of the House Paul Ryan spoke to the Texas caucus Tuesday morning. Speaker Ryan was accompanied by 8 or 9 security personnel, according to Wisenbaker. He said Speaker Ryan talked about putting together a message for the American public regarding what conservatives want to do. He called the speech “upbeat”.

Wisenbaker commended the speeches of “America’s Mayor” Rudy Giuliani and former Texas Governor Rick Perry. Governor Perry spoke to both the Texas caucus and to the convention. Wisenbaker also stated that Marcus Luttrell, author of Lone Survivor, which tells his story of the his experience in Operation Redwing in Bengasi, also spoke to the both the convention and the Texas caucus . He said it is great to know there are young people like this who have defended our national interests and are speaking out for our nation.

Wisenbaker said the food has been great for what little time we have had to eat and there is a lot of walking for delegates this week.