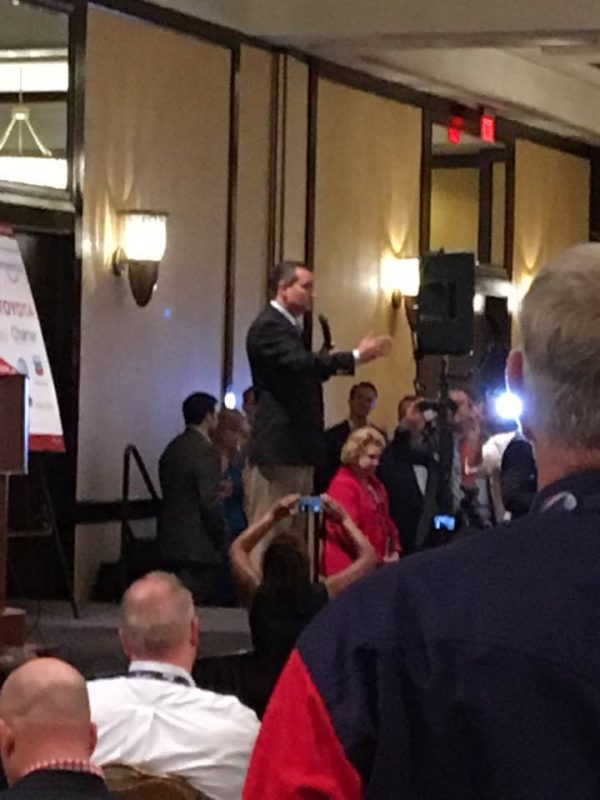 Texas Senator Ted Cruz addresses a Wednesday morning gathering telling them to vote their conscience. He repeated the phrase Wednesday night to the displeasure of the Texas Delegation to the RNC.

“Last year Texas Senator Ted Cruz stood on that very place and said he would support the nominee of the Republican National Convention. Wednesday morning at a Cruz event he said ‘vote conscience,’” according to Hopkins County Republican Chairman and RNC delegate from Texas Donnie Wisenbaker. Wisenbaker and many in the Texas delegation were not pleased that Cruz told the convention crowd Wednesday to “vote your conscience” and did not endorse Donald Trump for President.

Wisenbaker said a grass roots Cruz supporter from Kaufman County and delegate to the convention, Doc Collins, told Wisenbaker that if Cruz had said he forgave Trump for what his disparaging remarks against the Cruz family and had endorsed Trump, it would united the party and would have been the right thing to do. Wisenbaker said Cruz could have been the man of the hour but in Texas delegation, a lot are disappointed for what he said. “Those of us who do think are disappointed.”

Wisenbaker commended Indiana governor and Republican Vice-Presidential nominee Mike Pence. Even though there were problems with lights, cameras, and audio during Pence’s speech, he did well. It may have lost some of the effect of the moment but the content of his speech was spot on, according to Wisenbaker. He called Pence, a rock-solid conservative, the saving grace of the ticket.

“There as a lot of energy on the floor last night and should be even more tonight with Trump speaking. Wisenbaker said last night felt more like what a political convention should even with the Cruz gaffe.