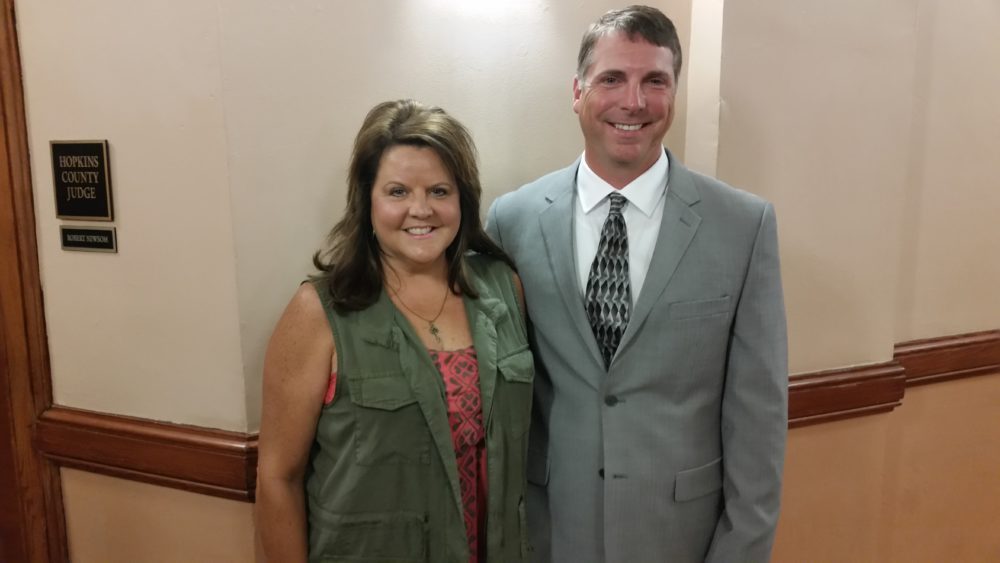 Endsley and his wife were present at Commissioners’ Court Monday for the announcement.

Andy Endsley has been named Hopkins County Fire Chief. Monday morning during the regular session of Commissioner’s Court, Endsley was unanimously chosen from among 12 applicants, six of which were interviewed, to fill the vacant position.

In an interview with Endsley, who lives in the Brinker Community in Hopkins County, following his appointment, he said he has experience with Hopkins County Fire Department in the past. For seven years he was a part-time paid fireman for the county. He said he knows the county and the system. He has 22 years’ experience as a paid fireman. In 1989, he was a volunteer and decided to become a professional. Following training, he worked for the Atlanta, TX Fire Department before returning to Hopkins County. He has been currently serving as Chief for the Brinker Volunteer Department. He will be resigning there as he begins his new work.

He stated he understands the work of the volunteer as well as the professional side and that the relationships that are already forged will provide a good working relationship. He is aware of several needs in the county fire department and will begin addressing those as he has the time to prioritize. He credited the work of Interim Chief Matthews for having already answered some of the needs.

In naming Endsley the new chief, County Judge Robert Newsom and Commissioners stated their reasons for choosing him. Judge Newsom said that Endsley had an outstanding interview. Commissioner Beth Wisenbaker stated that his reputation and heart convinced her. Commissioner  Mike O’Dell commended his appearance and presentation. Bartlett highlighted Endsley’s background and history with the local volunteers. Commissioner Danny Evans made the motion to elect Endsley.