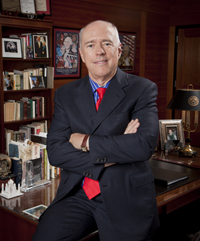 Since 2001, Dr. Keck has served as the fifth president of Texas A&M International University in Laredo, where he worked closely with Dr. Jones, who served as provost from 2003 until his presidential appointment at Commerce.

“We lost a tremendous leader when we lost Dan Jones,” Sharp said, “In appointing Ray Keck as Interim President, we help insure that Texas A&M University-Commerce will be in capable hands during this difficult transition. His experience as President at Texas A&M International University will help him to lead TAMU-C and keep the incredible momentum they have established going into the future.”

Keck will assume the role of interim president on June 1, 2016 and will continue through the 85th Legislative Session, which begins in January 2017 and will conclude in May 2017, Sharp added.

“We will appoint a search committee at some later time to begin looking for a permanent president for TAMU-C, and until then we have every confidence that Dr. Keck will provide the solid leadership that will help keep this remarkable campus moving ahead, especially through the upcoming legislative session,” he said.

Under Dr. Keck’s leadership, enrollment at Texas A&M International University has more than doubled, and it now serves a higher percentage Hispanic population than any college or university in the country.

The campus has experienced a number of major improvements and additions since 2001, including the complete upgrade of the Lamar Bruni Vergara Planetarium, the establishment of the Senator Judith Zaffirini Student Success Center, and the creation of the Texas Academy of International and Science, Technology, Engineering and Math (STEM) Studies.

In recent years, Texas A&M International University has been consistently recognized in rankings by leading national publications, including Washington Monthly and Money magazines and The Economist, for providing a high value education for its students and graduates.

Before serving as President, Dr. Keck, who was reared in Cotulla, Texas, and considers Laredo his hometown, was Texas A&M International University’s provost and vice president for academic affairs. Prior to that, he served as associate professor of Spanish and chair of the Department of Language, Literature and Art for the University’s College of Arts and Humanities.

Dr. Keck is also an accomplished organist, with a specialty in J.S. Bach. He has performed as a guest artist across the State and nation and on numerous occasions with the Laredo Philharmonic Orchestra.

He is married to the former Patricia Cigarroa.

“To have served Texas A&M International University as president for 15 years has not been a job.  It has been a life, our life for me and for my family,” Dr. Keck said.  “That Chancellor Sharp should entrust me with a new challenge is humbling.  I willingly embrace his mandate, to continue and build upon the legacy left by President Dan Jones at Texas A&M Commerce.  At the same time, the Laredo community, Patricia’s and our daughters’ by birth, mine by adoption, remains deeply embedded in our souls.”

Sharp also announced that Pablo Arenas, Provost at Texas A&M International University, will succeed Keck there as Interim President. A search committee will be appointed soon to seek a permanent successor.