The new “location” voting process turned out to be very successful on getting people to vote through the easier access to voting locations.  Unlike in the past, a voter didn’t need to find their specific “voting box” to cast their vote on election day.  Instead, any Hopkins County registered voter could go to any location throughout the county and cast their vote.  The specific vote would then be counted and redistributed into the appropriated “voting box” like before.   This new method provided a little confusion on election night, as KSST News was receiving the numbers from the County Clerk’s office.  The first numbers came in as totals from a “Location” which would have votes that were cast from any and all “boxes”.  KSST is used to doing it the old way and having the individual box numbers come in as a whole.  It only took us a little bit to figure out that those old box numbers couldn’t be totaled until ALL of the locations had been totaled.  Although we think the new Location voting system is much more efficient and convenient for all voters, we realize that some voters like to know how their neighbor voted and want to see the old box number totals.

Also, the number of overall voting locations has been reduced from 21 to 14 (on election day).  KSST fielded many calls on election day from voters needing to know “their” voting location.  It is so much easier with this new system to give voters several options on where they could go cast their vote.  The ease of voting on election day coupled with extended early voting times (even on weekends!) has made voting the easiest it has ever been.  This resulted in a great turnout for this last election.  With over 8,000 votes cast in this election, it has to be one of the highest turnouts in recent memory.  The County Clerk’s Office is certainly the unsung hero of this entire process.  The coordination of all of the polling locations along with the programming and tabulation involved in all of the voting machines has to be a huge job.  Thanks also to all of the election judges and other folks that help throughout the entire process.  Lots of work goes into Election Day before it happens, but it takes an army of folks to staff all of the locations all day long.  KSST only heard of one polling location that had some machine trouble on election day.  With all that it takes to get it all together, we think that is a pretty good score.  I have listed below the sheriff’s race vote totals as we received them from the County Clerk’s office, by BOX number.  We will be adding more of the box number totals soon. 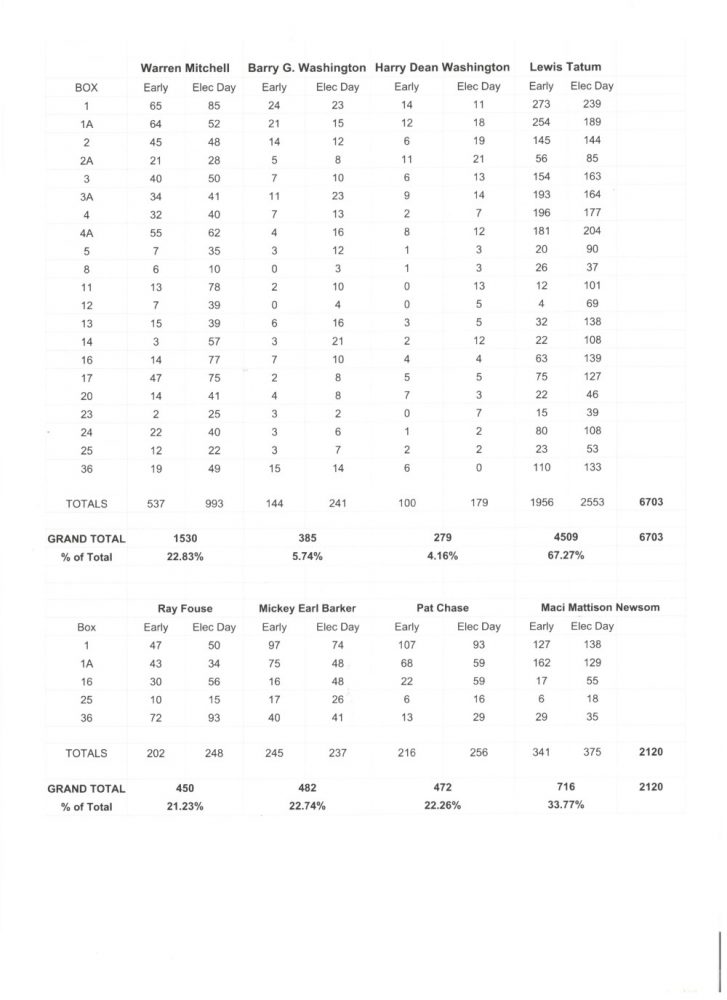