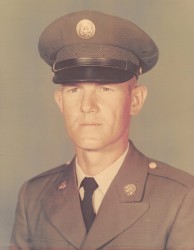 Larry Riley passed away on June 1, 2015 in Paris, TX.  Larry was born on October 17, 1948 in Enid, OK, the son of Ivan Tub Riley and Venita Lanning Riley.  He married Shannon Carrell on July 11, 1998 in Hugo, OK, she survives.  Larry’s occupation was a stainless steel welder in the food processing industry. He also served in the United States Army for many years.

He is preceded in death by his parents and brother.