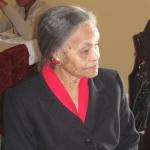 Funeral service for Modis Robinson McMillan, age 88, of Emory, will be held at 11:00 am, Wednesday, Dec. 17, 2014, at Emory Baptist Church. Rev. Willie R. Byrd will officiate. Burial will follow in Hopewell Cemetery. Visitation will be from 6:00-8:00 pm Tuesday evening at Wilson-Orwosky Funeral Home.

Funeral arrangements are under the direction of Wilson-Orwosky Funeral Home.