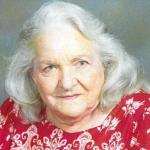 Sue passed away on Friday, November 21, 2014 at Rock Creek Health and Rehab in Sulphur Springs. She was born in Nelta on August 20, 1931, the daughter of Thomas Floyd and Grace Gertrude Argenbright Jobe. She married Joe Glenn Scott in 1950 in Sulphur Springs.  She was a Cosmetology Instructor for thirteen years and a member of the VFW Ladies Auxiliary and Drafters of American Revolution.

She was preceded in death by parents, daughter, Dianna Bardas; brothers, Kenneth Jobe and Roy Jobe and sisters, Juanita Adams and Lou Woolsey.