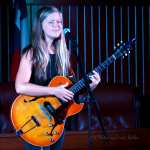 The Crossroads Music Company has been busy this season lining up concerts for the adoring fans. They have hosted renowned artists like Slaid Cleaves, the Sgt. Pepper’s Lonely Bluegrass Band, Rhett Butler, Kate Hearne and Emily Elbert, just to name a few.

Most recently gracing the stage were Hearne and Elbert with their sweet sounds.

“I was very impressed by both girls. They have taken their songwriting to the next level. I see good things on the horizon,” said Gus Gustafson, owner/operator of Crossroads Music Company & Listening Room. He noted both ladies have grown up in the world of music.

Hearne performed her hits including, “It’s You,” and finished with “Our Love has a Chalkline,” inside the quaint room.

“Crossroads was my first stage,” said Hearne, a Winnsboro graduate. “I saw lots of talent at a young age.”

Elbert was also pleased to be back in Sulphur Springs and performing with Hearne. Born and raised in Texas, Emily first fell in love with guitar at 14. Some of her inspiration is derived from Stevie Wonder. She opened with “In With The New” from her album Evolve. In honor of the holiday she performer “Thriller” by Michael Jackson. She rounded out her set with a tribute to the Beatles. 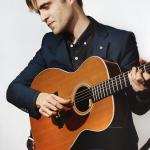 Next on the agenda for the Company will be artist Kirby Brown along with opening act Ryan McKenzie. Brown, a 2006 Sulphur Springs High School graduate, brings an extraordinary personality to the stage as he is a writer, singer and musician. His genres include Americana, Singer-Songwriter, Roots Music and Rock and Roll. This Texas-born song writer will bring his guitar to the Chamber Listening Room at Sulphur Springs City Hall on Wednesday, Nov. 26 at 7:30 p.m. His biography describes him as a “a poet-laureate of the working man, his stories are told through the eyes of people that we all have known – broken down but still feeling invincible, burnt out but longing for more, waiting for a sign at a crossroads where struggle hopefully meets redemption.”

“It will probably be a blend of songs that will appear on my new record, songs that appeared on my debut album Child of Calamity, some brand new ones I just wrote, and definitely a few from the archives that some of my hometown friends will know,” said Kirby Brown, on his upcoming set for next Wednesday.

He has been recording at Muscle Shoals Sound Studio in Alabama, where The Rolling Stones, Willie Nelson, Bob Dylan and many more have recorded successes.

“He [Kirby Brown] has headlined for us before at the 30 East Music Fest,” added Gustafson, who also works as the Event Specialist for the City of Sulphur Springs. He is excited about the upcoming artists being booked on the calendar.

The events at City Hall are sponsored by Grocery Supply Company and Sulphur Springs – The Celebration City. Tickets are available $10 in advance or $15 at the door at City Hall, located at 201 North Davis Street downtown Sulphur Springs. For more information go to crossroadsmusiccompany.com/store or call 903.342.1854.