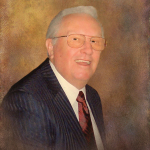 Mr. Clark passed away Saturday, October 11, 2014 at his residence. He was born on March 23, 1938 to Clarence Frank and Opal Faye Walker Clark. He married Verta Gentry on May 30, 1959 in Commerce, TX. She preceded him in death. He later married Peggy Cook on June 28, 2003 at Corner Stone Baptist Church in Cumby. She survives. He served in the United States Air Force Reserves and also worked for E-Systems as a mechanical design engineer for 33 years. He was a member of Corner Stone Baptist Church in Cumby and served as a deacon. He was a board member of Cumby Telephone Coop., Miller Grove Water Supply Company, Miller Grove Cemetery Association, and also a former member of the Lions Club.

In addition to his wife Peggy Clark, he is also survived by daughters, Julie Hauser and husband Don Hauser of Greenville, Bridgette Muncey of Dallas, grandchildren, Shelby Madison Hauser and Marissa Opal Rose Hauser, step-son, Micah Cook and wife Diane and their son Blake, brother-in-laws, Doyle Fowler and wife Linda, Billy Jay Fowler and wife Joyce, and sister-in-law, Mozelle Hyatt. He was preceded in death by his first wife, Verta Mae Gentry Clark in 2002. In lieu of flowers, memorials may be made to Corner Stone Baptist Church in Cumby, TX. Arrangements are under the direction of West Oaks Funeral Home. www.westoaksfuneralhome.com