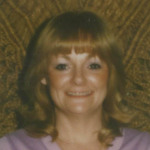 Monday September 22, 2014 heavens garden received a beautiful rose. Sharon Gann will be dearly missed by many. Her feet may no longer touch this earth but we feel her presence each time we look up. She is the softest cloud by day and the brightest star during the night. Her heavenly crown holds many jewels and will forever shine in the hearts and memories of all who were touched by her.

Sharon was born October 1, 1944 in Omaha, Nebraska to Harrison W. Yount and Larhea Bonita Head. This loving mother is survived by her children, Sandy “Sam” Hodges of Sulphur Springs, and Kenny Cowan and his wife Kathleen from Mansfield. She had three grandchildren, Miranda Hodges, Kaylee Cowan, and Dakota Cassidy, plus one sister, Sandra Lay and husband Terry of Bonita Springs, Florida. She was a member of the First United Methodist Church. She was an extraordinary lady who was an engineer at H.D. Lee’s. She owned the 127 Club, managed Braum’s and Taco Bell for many years, and she also ran Discount Mobil Tax Service. Sherry was unforgettable and she lived life to the fullest until the very end. She was understanding and patient too.