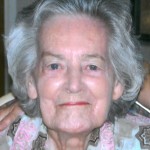 Graveside funeral service for Ruby Smith, age 86 of Sulphur Springs will be 10:00 am, Tuesday, August 12, 2014 at Mahoney Cemetery with Rev. Bruce Stinson officiating. Visitation will be 6 till 8pm,Monday, August 11, 2014 at Murray Orwoksy Funeral Home.

Ruby Lee Smith died on Friday, August 8, 2014 at Carriage House Manor Nursing Home. She was born in Hopkins County, TX on July 3, 1928, the daughter of Holton Dewitt and Nealie Butler Barrett. She married Willie E Smith on November 19, 1945 in Hopkins County. He preceded her in death in 1978. She was a homemaker and retired from H.D. Lee Company.

Memorial can be made to Mahoney Cemetery Association. Arrangements are under the direction of Murray-Orwosky Funeral Home. The online register can be signed at: www.murrayorwosky.com