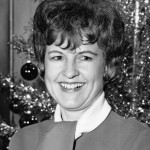 Funeral services for Reba Nell Tollison, age 90, of Sulphur Springs, will be held at 2:00 p.m., Friday, August 1, 2014 at West Oaks Funeral Home Chapel with Bob Woodruff officiating. Interment will follow at Yantis Cemetery with Randy Walker, Sidney Walker, Lance Walker, and Mitchell Walker serving as pallbearers. Honorary pallbearer will be Alan Ross. There will be no formal visitation. Mrs. Tollison passed away on Tuesday, July 29, 2014 in Tyler, TX. She was born on July 10, 1924 in Yantis, the daughter of Robert Lavert and Dema Segers Ross. She married Richard Tollison on March 22, 1943 in McCallister, Ok. He survives. During WWII she worked at Chance Vaught in Grand Prairie where she riveted the wings of a P-51 “The Mustang”. She was one of the original “Rosie the Riveters” being a member of the WWII greatest generation. Other survivors include several nieces and nephews. She was preceded in death by four siblings. Arrangements are under the direction of West Oaks Funeral Home.