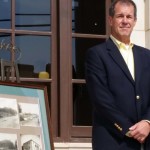 Sulphur Springs City Councilman John Sellers told the history of the old U.S. Post Office Building on its’ 100th birthday Tuesday as it was rededicated as the new City Hall. The site once was a wagon shop and then a blacksmith shop. The land was purchased by the nearby First Christian Church, who then sold it to the feds in 1909. The U.S. Post Office was finished in July 1914. The city last used it as a public library.